Ready for publishing: no 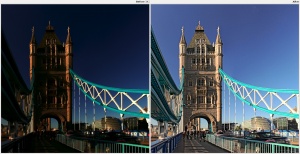 Tone mapping was used on this high dynamic range (HDR) 32-bit TIFF image to make it look aesthetically pleasing and viewable on low dynamic range media, such as a computer screen or on paper.

The Tone Mapping tool can be used to lift the dark areas of your photo in a way that prevents halos from appearing, and it can be used to bring out or suppress detail, to make the photo more crisp or more 'dreamy'. Tone mapping adjusts the global contrast of an image differently from the local contrast. Specifically, it's very useful for decreasing large scale contrasts while preserving (or boosting) small scale contrasts. The method used is taken from Edge-Preserving Decompositions for Tone and Detail Manipulation with some modifications.

Note: tone mapping requires a lot of memory (RAM) and is CPU-intensive.

1.1 Getting the preview to match the saved image

The effects of this tool highly depend on the size of the input image in the engine's toolchain. To keep the preview fast, RawTherapee feeds each tool with the image you see in the preview at the same resolution as the preview, not the original, huge one (however, when you save an image, it uses the original, huge one, which is why saving takes longer). Processing a 900x600 image is much faster than processing a 7360x4912 one, for instance. The side-effects of this are that the zoomed-out preview may not match the saved image, depending on the "Edge Stopping" and "Scale" sliders.

You will find that the default values for this tool are Edge Stopping=1.40 and Scale=1.00. These values generally lead to great results, but specifically the Scale value is the one which leads to differences between the zoomed-out preview and saved image. If you set Scale=0.10 (the minimum) while tweaking your zoomed-out photo in RawTherapee, and then, just before saving it, you change it to Scale=1.00, the saved image will match the zoomed-out preview very well. Use this trick to get the preview to match the saved image. It works best when Edge Stopping is around 1.40. Remember that if you zoom the preview to 100%, it will perfectly match the saved image regardless of what slider values you use.

This controls the strength of the overall effect. As of version 4.2.156, as you increase the strength, shadows are raised and highlights are slightly lowered in a way which aims to preserve the average luminance of the image thereby preventing the washed-out look.

Gamma moves the action of tone-mapping to shadows or highlights.

This parameter affects sensitivity to edges. The greater it is the more likely an illumination change is to be considered an "edge". If set to zero tone mapping will have an effect similar to unsharp masking.

This control gives meaning to the difference between "local" and "global" contrast; the greater it is the larger a detail needs to be in order to be boosted. See the note above on the influence this setting has on the preview vs the saved image.

In some cases tone mapping may result in a cartoonish appearance, and in some rare cases soft but wide halos may appear. Increasing the number of reweighting iterates will help fight some of these problems. When more than zero reweighting iterates are used, the best results will be had if the edge stopping parameter is set to one (technical detail: this results in a 1-norm approximation of the smoothness using iteratively reweighted least squares). Artifacts in high contrast edges may begin to appear when this value is set to about 1.8 or higher.